All humans made errors and we are never one perfect being. Even bosses. Despite some of them think they are the greatest person on earth and we should not use our brains but to kiss the ground they walked on. Yes, as painful as it is, there are such bosses and I have encountered enough of them in my lifetime. But it is not them that I found hard to reject, it is actually the nicer bosses that I found nearly impossible to say no to even I know it is good for them.

Here are the scenarios and ways on how to say no to your boss (without casualties):

1. Boss insist he is right when he is wrong
Openly invite him to explain to you and be open-minded when he does that. Ask questions to probe and understanding his points of view. Gather facts and figures to reason with him and share, not argue your point across. You can also refer to this article which I expand on this advice.

2. Boss ask you to work overtime today
And you can’t because of personal commitment. It is alright to let your boss know you have a life after work. If it is occasionally requested, it’s probably fine as long as you are properly compensated. If it’s more than once a week, it is perhaps time to seek a much more permanent raise in benefits. You can be nice too, by offering to do overtime the next day or by asking someone else to step in to take the extra duty.

3. Boss ask you to double up someone else’s duty
I don’t mind doubling up someone’s duty even to cover for them when they are on leave. Especially if the role is distinctively different from mine, gives me a great opportunity to learn something new and add on to my profile. It is a win-win situation so why not? However, if your boss is reining in this favour once too many times to be comfortable and you are suspecting he is trying to save money not to a hire someone new instead paying you one salary two jobs, it is about time to call his bluff. You don’t have to threaten to leave (not yet) but you could tell him straight up that it is not fair and right to you.

4. Boss ask you to be patient
You have been waiting for a promotion for years (key word here is YEARS) or you have watched silently as you get passed on promotions after promotions. If you are sure that it is not your capabilities or your attitude that is hindering you from climbing up, find out what it is. Is it rubbing shoulders and bias on the bosses’ end? Or it is the company loves to play by the “longer you work here, the higher you climb” rule. If it does not seem fair to you, set an ultimatum with your boss. Appreciate you or you’ll walk. 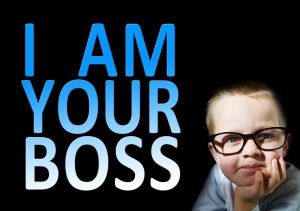 5. Boss ask you to be more
Unless your boss is specific, more is more at where, at what? Some bosses I know tends to say things like “You have to work harder to get that promotion.” or “Your numbers have to be better.” These are non-specific comments and are as good as not saying them. Probe at your boss to give you a specific target. Work Harder = Longer Hours? Number to be better than what? Set a target.

Do you face a different scenario? Let us know how you handle it at the below comments.

58 replies on “Rejecting Your Boss”