Guest Post: Your Day in Court: A Public Service Announcement

Denny, a recent MiddleMe follower has this wonderfully witty blog that I can’t stop reading. His articles are pretty cool and interesting, and I have picked one of them to showcase here. So if you enjoy his writing as much as I do, hop over his blog right now! 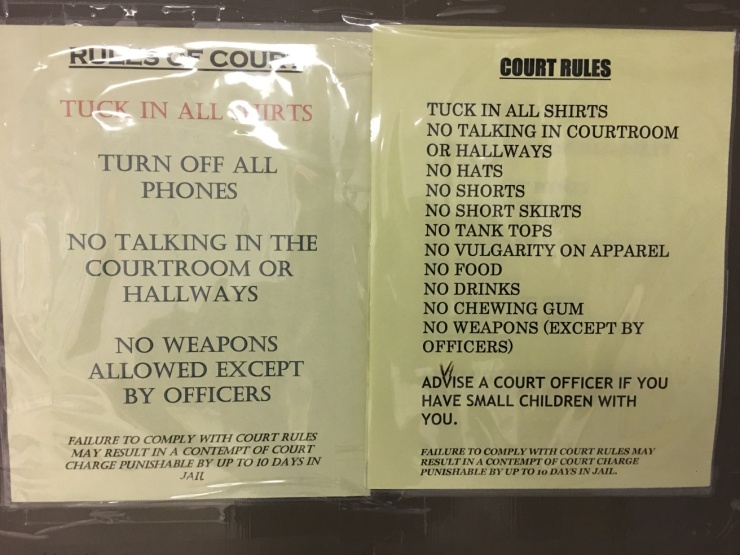 I’ve been a probation officer for going on 14 years and have served in many different Criminal, Circuit, General Sessions, and Municipal courts.  I’m wise enough to know I haven’t seen it all and experienced enough to know there are very few human behaviors or actions that will shock or surprise me.  But because I continue to see repeated patterns of courtroom behavior that seem far outside the realm of common sense, I decided to offer some advice to those of you who have never or don’t often see the inside of a real courtroom.  If you don’t already know it, they bear small resemblance to the ones you see on TV.

Now I know I’m a member of a vast and sophisticated, educated, law-abiding group of fine, upstanding e-citizens endowed with bottomless stores of smarts and common sense and that most of you will never commit (would never even think of committing!) any act that might cause you to be called to court.  Nevertheless, hear me out.  After all, accidents do happen.

So you’ve been called to court.  You hardly understand why.  Maybe you were driving down the road at or just below the speed limit because you’re a conscientious driver when all of a sudden those blue lights sprang to life in your rearview, your heart revved up to 150 – 200 BPM, you tasted that bilious spit at the back of your suddenly-dehydrated tongue, and panic set in.  You rolled down the window, and the officer informed you he pulled you over because your taillight was out, but then he detected a faint whiff of marijuana wafting from your window, so he asked if he could search your vehicle.  Clueless, scared shitless but helpfully compliant, you granted permission knowing there was nothing illegal in your vehicle.  Except the half-empty baggy of funky-smelling, green leafy substance and the strange-looking pipe that your roommate’s shady friend, the one you gave a ride three weeks ago and haven’t seen or heard from since, must have forgotten he left tucked way up under the passenger seat.

Or maybe a friendly argument with your spouse got out of hand, and a concerned neighbor called the police.  Maybe the obtrusive old widow who lives across the street got worried when she saw you stumble down your driveway, pee on your mailbox, then pass out with your head inches from the curb, so she called an ambulance, and the EMTs called the police as they’re obligated to do when they discovered you were highly inebriated and lying half in the public roadway, where you’d rolled, semi-conscious, trying to evade the puddle of vomit you’d spewed.  Maybe you locked yourself out of your house so called 911, and the pissed-off police officer wrote you a ticket for misuse of emergency services.

Do those scenarios sound farfetched, too funny to be true?  I have witnessed all of them and dozens of others like them countless times.  When it does happen to you, I assure you it won’t be funny.

Whatever caused you to have to appear in court, here you are.  Take another look at the picture of Court Rules at the top of this post.  Yes, those are actual rules Scotch-taped to a real courtroom door.  What?  You think they look tacky and amateurish and that surely a 21st-century court would have much more professional-looking rules posted?  Maybe a Website you could visit beforehand to prepare yourself?  While such may be the case in wealthier, more cosmopolitan, large urban judicial districts, what you see here is similar to what hangs in innumerable courthouses throughout rural America.  Why, you wonder?  Lack of money, of course, because Americans have grown weary of paying taxes to support their government institutions.  But that’s a whole ‘nother issue for a much later post.

You may find it strange that those rules have to be posted, that people have to be told they must to come to court wearing suitable attire and to not bring food, beverages, cell phones, or weapons.  Maybe you’re thinking to yourself, “Duhh…That’s just plain common sense!”  Friend, you’d be surprised.  In a minute I’ll tell you about some of the clothes I’ve seen people wear to court and some of the behaviors exhibited in our exalted fortresses of rectitude and solemnity.  But first I’ll tell you why those rules exist: 1) To minimize distractions and delays as the overdocketed Court and insufficient staff attempt to carry out their duties as swiftly and efficiently as possible and preferably no later than by the end of normal business hours; 2) To reduce the risk of physical harm to all present; and 3) To show the Court the respect it’s due.

Here’s a a short list of some of the unsuitable or offensive clothing I’ve seen in the courtroom.  Countless men and women, attractive and un-, young and old, tall and short, fat and skinny, wearing skimpy tank tops, tube tops, halter-tops (yes, men too), short-short skirts, short-short shorts, bikini bottoms and athletic bras, or see-through tops & bottoms with no discernible undergarments.  Unwashed, greasy-haired, rank-smelling men and women of all ages wearing filthy, torn, urine-stained, and beer-smelling jeans and t-shirts advertising all manner of things such as: death-metal bands complete with depiction of upraised middle finger; “Wanna Fuck?”, “Fuck You and the Horse You Rode in On”, “Fuck Me”, “I’m with Fuckin’ Stupid”, “What the Fuck Just Happened”, or “Don’t Judge Me” printed in large block letters; baseball caps and screen-printed t-shirts painted with marijuana plants, whiskey bottles, and beer cans; and I won’t even get into the tattoos on display except to mention the one inked across the ample cleavage of a young woman overflowing her skintight, lowcut pullover: “Guilty” in a beautiful, bold, Gothic font.  Invariably, such sartorial sacrilege leads to the flabbergasted Judge asking some version of the question, “When you woke up this morning knowing you had to come to court, what made you think it was a good idea to wear that?” Often just before he orders the security officer to escort the offending defendant to jail for Contempt of Court.

Regarding courtroom behavior, here are a few scenes I’ve seen played out.  Any names used here are fictional to protect the privacy of the guilty or just plain ignorant.  During an Assault hearing between defendant Lucy , victim Sally, and witness (defendant’s boyfriend, victim’s husband) Winston after Sally caught Winston in Lucy’s bed having sex with Lucy then Lucy allegedly proceeded to beat Sally with a curling iron.  In open court, Lucy curtly informs Sally that Winston wouldn’t have to be sneaking in her back door if Lucy would wash her nasty, smelly old pussy every now and then.  Lucy replies that she happens to have the sweetest pussy in the county.  Overcoming his initial shock, Judge bangs his gavel.  Then Sally says that no, she has it on good authority that she has the sweetest pussy in the county.  The gavel bangs several times as Judge calls loudly for order.  Winston leans in leering, squeezes Lucy’s ass, and loudly proclaims that yes, Lucy does indeed have the sweetest pussy in the county, or at least on their street anyway.  By now the gallery is laughing uncontrollably, and the security guards are having to drag Lucy & Sally away because they’ve begun to slap at each other.

I have lost track of the number of times defendants have shown up so drunk or stoned that they can’t stay awake in court and aren’t competent to stand trial but who plead out anyway because they just want it to be over.  They often have long, confusing, embarrassing, nonsensical but hilarious conversations with the Judge as they try to justify their actions.

I’ve witnessed a man charged with Animal Abuse for beating his pit bull, after telling the Court he trained the dog to attack law enforcement officers who might show up to bust his home meth lab, admit to regularly feeding the dog his daughter’s prescribed Xanax because his training had caused the dog to become so aggressive that he could no longer control it.

I’m sure I’ll rant more about my experiences at work from time to time.  I may even try to silence my gibbering, stentorian inner critic long enough to attempt some short stories about them.  For now, I’ll close with some advice.

If you’re so unfortunate as to be called to court, come prepared mentally, physically, and materially to wait.  Be aware that almost every court in this country is underfunded, understaffed, and overburdened with ridiculously large dockets, and no other defendant present wants to be there any more than you do.  Hell, half the overworked, underpaid district attorneys and public defenders don’t want to be there either.  Be patient.  Do not come to court under the influence of narcotics or other illicit drugs or smelling of alcohol.  Don’t bring a weapon, not even a pocket knife.  Wear decent clothes.  Cover as much of your skin as you can, especially if those tattoos you’re so rightly proud of may be considered offensive to unschooled observers.  Be patient.  Bring a book but not your phone or any food.  When you hear your name called, stand up quickly and loudly answer “Here!” or “Present!”.  Be patient.  Don’t fall asleep.  Don’t wear a hat.  Don’t wear sunglasses.  Be patient.  Do not bring young children.  If you do, keep them quiet.  Be patient.  If a security guard or bailiff addresses you, comply with his instructions and for goodness’ sake DON’T argue with him.  Be patient.  When speaking to the Judge, address him or her as “Your Honor.”  By all means, if you are contemplating a guilty plea or a no contest plea because you just want it to be over with, and especially if you are so foolish as to enter a plea without the benefit of legal counsel, be absolutely sure of what that plea and its consequences mean for your future.

Take care, be well, and I’ll see you in court.

9 replies on “Guest Post: Your Day in Court: A Public Service Announcement”