When we select who to meet, we come close to pick the right candidates for the open positions. Sometimes, we may miss the mark and sometimes we are horrified by how far the interviewees are not who they said they are on their resumes.

As a hiring manager and currently a freelance recruiter, I can attest some of the horrible interviewees that I’ve come across in my life. But today, I get to share what others have gone through and you get to read it for yourself.

We had some junior positions open in our newly minted company. The pay isn’t great but the working culture is awesome.

We have great health benefits, flexi-timing and sorts. So this guy came in for the interview and started to boast how great his profile is. We listened politely and nodded along a few times until he started to ask if we’ll pay him 10k per month for his salary!!

Mind you, it’s a junior role and we have already stated the salary range in the job ad that is nowhere near half of what he is asking.

Why would he waste his and our time?
– Serena D, Service Recovery Manager

Her resume looks great. She’s been an assistant manager for the same role the same industry for a couple of years. HR and I thought she’ll make a wonderful step up as a manager given relevant training.

One warning sign was when she rescheduled her interview at the very last minute. Then when she finally made it, she brought along her mother!

When we asked her about it, she says her mother does not believe that she is going for a job interview. Turns out that her previous job as an assistant manager was in her family business and her mother didn’t want her to leave.

Nope, she didn’t work with us. In the end, her mother convinced her that we are not good enough for her daughter.

Our retail chain was massively hiring young women and men to join us as a service crew. It was a walk-in exercise that held over a few days.

Imagine our surprise when a man that looked around in his 40s asked to be interviewed.

Well, my company has a no discrimination policy so we had to go ahead and give him a try. It turned out that he was interviewing on behalf of his teenage daughter and make sure that we are not exploiting teens for cheap labour.

We politely told him that his daughter has to attend the interview (and not him) for us to consider her as a candidate. We also turned down his weird request of an allowance so he can quit his current job to shadow his daughter throughout all her shifts.

He began to get upset and started to shout at us for lying about being an equal opportunity employer. We had to get the mall’s security to haul him out.

In the end, his daughter did come for the interview the next day. Alone. She was hired on the spot because of her bubbly and sweet personality.
– Jay A, Retail Manager

My company was hiring an administrator and we narrowed it down to the last 3 candidates.

I must admit that our location is pretty obscure and hard to find even on Google Maps. It was a long day and we just finished up all our daily tasks. We just have one more candidate to interview near to our closing hours.

The candidate “John” was late, he walked in pretty drunk (stumbled a few times) and his speech was slurred. He admitted that he had been in our area 2 hours early but couldn’t find our office and popped into the nearby bar to get directions.

In the end, he stayed for a few drinks with the bartender before getting directions to us.
– Simone, Hiring Manager

She sounds pretty nice over the phone and immediately I invited her over for an interview for a sales rep.

The “she” turns out to be a 50 years old lady who emits very bad body odour.

Throughout the 30mins interview, I had to hold my breath partially and my hiring manager keeps excusing himself to get out of the room. I had to keep choking and coughing to myself. She kept scratching her head (probably due to nerves) and you can see dandruff flaking off her hair and unto the table.

I don’t think she is suitable to meet any of our clients.
– Maryann, HR officer

This is one of my weirdest interviews ever.

A young and well-dressed man was applying to a junior executive role in our marketing department. With his strut, you can tell he is full of confidence which I like.

The moment he sat down for the interview, he shot us like 10 questions within 10 mins. Then without giving us time to digest and answer his questions, he proceeds to ask another 10 more questions.

All the questions are relevant but some of them are pretty confidential and until you are hired, we won’t be giving you that information. I had to cut him off to explain to him that I will answer all of his questions bit by bit and he told me off for interrupting him!
– Oliver, HR Manager

It was a long week and we are wrapping up our recruitment drive of hiring a target of 50 customer service agents.

In comes our last candidate, let’s call her Betty.

When she walked into the interview room, she was already on her phone, talking to someone. She puts her free hand up to indicate she needs some time to end the call. I looked at my hiring manager and she looked back at me with a shrug of her shoulders.

You can tell by her replies to the other end that it wasn’t an emergency call (sounds like setting up a movie date over the weekend). Betty ended the call after 5 mins, didn’t apologise and proceed to ask us how long “this” is going to take because her boyfriend wants to pick her up.

Her replies to most of our questions are either a yes, no or some one-word answer. 10mins into the interview, she picked up her phone and begin texting.

By this time, I can feel that my hiring manager is losing her patience. When I politely asked her about the texting, Betty’s smug reply was that she is posting on Facebook that she is going to get this job.

Of course, she didn’t get the job!
– Avery, Recruiter

This guy couldn’t care less about the job. He walks in with berms and sandals, unshaven, hair in a mess. He is applying for the role as a supervisor but he doesn’t have the basic qualifications.

After just 5 minutes into the interview, he admitted that he didn’t want a job but his fiancée strong-armed him to get one. He is pretty bummed out that he has to waste an hour to come here whereas he could have stayed home and played on his PlayStation.

After that, he begged us (on his knees) to give him a job (any job) that only requires him to come into the company once a week so that his fiancée won’t call off the wedding.
– Paul, Recruiter

Everything was going so well in this particular interview. She was well dressed and had a bright smile. She has a glowing resume with equally glowing credentials and recommendations. Some of her answers were the best among the others we had interviewed.

I almost cried gleefully that I have gotten the perfect one. Until I asked her why she had left her last job.

She went on the next 15 mins to confess that she had stolen from her company and lied to her clients. Her boss is a jerk that let her go. She didn’t sound repented, in fact, she wishes she wasn’t caught so that she can continue stealing from them!

I’d say she’s lucky that her previous company didn’t press charges. Needless to say, our bank can not afford to hire her.
– Gilbert, HR executive 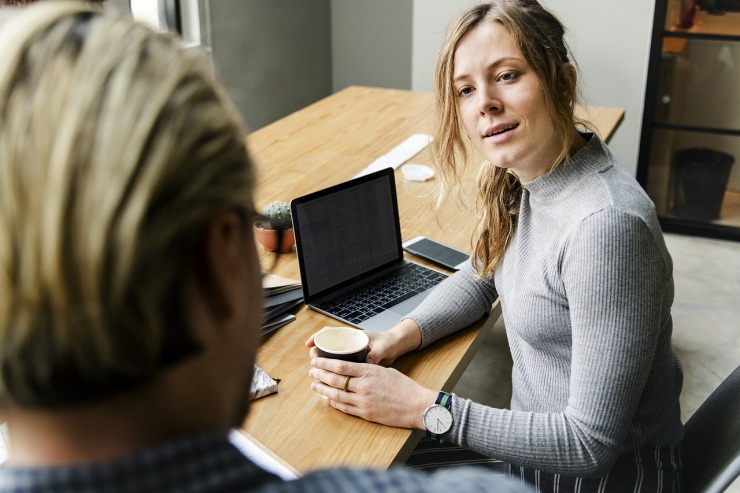 This guy came in for an interview with his shirt wet from back to front. His forehead was dripping with sweat that nobody in the room moves forward to shake hands with him. We can all tell he is extremely nervous.

He choked on his saliva a few times and he kept wiping his hands on his pants because they were sweaty. I was so afraid that he’ll pass out during the interview that I went out to grab him a glass of water.

After the interview was over, we discussed among ourselves and thought maybe we give him another chance, put him in a room 1 on 1 instead of a round table audience. The same thing happened again.
– Thomas, Recruiter

She didn’t even make it past the reception to the meeting room. She came in with her elderly grandmother in a wheelchair and with her two brawling kids in a row. My CEO happened to be walking past and told her to get her life right before interviewing for a lawyer position.
– Ellen, Recruitment Manager

For more real-life stories that I know you will enjoy, try browsing through these:

Real Life Anecdotes From Hotel Staff All Over The World

Best things in life are meant to be shared, start spreading MiddleMe around, after all, sharing is caring.